Looking for a unique gift?
Consider a pet frog!

I got my first African Clawed Frogs in 2004. They have been interesting and fairly easy to care for pets.

When my five-year-old daughter said that she wanted to raise some tadpoles, I thought it sounded like a fun and educational idea. Within a few weeks, we were the proud owners of 40-something tadpoles. Half were albino, the other half were dark.

Watching them grow and transform from little tadpoles into slippery, slimy frogs was very interesting. You can see some of their stages of development in the picture above. The survival rate of these babies was much higher than expected. I think all could have survived if it weren’t for a few mistakes on my part.

What you will need – Getting Started:

You won’t need too much to get started with young African Clawed frogs. My first one did well for months with:

NOTE: I WOULD NOT SUGGEST STARTING WITH SUCH A SMALL AQUARIUM UNLESS YOU ARE SURE IT IS GOING TO BE TEMPORARY. (LIKE A QUARANTINE AREA OR A TEMPORARY HOLDING TANK WHILE YOU PURCHASE AND PREPARE SOMETHING BIGGER.)

Caring for your frogs:

It can take 7 – 12 months for froglets to reach full size. By the time our frog was a year old, the 2-gallon aquarium was obviously too small. So I did some research to learn how I could take better care of our newest pet.

Preferred Tank Size – 10 gallons of water per frog, not too deep

Grown frogs should be housed in an aquarium big enough for them to have at least 5 gallons of water per frog; 10 gallons per frog is recommended. Regardless of how many frogs you have, you should get at least a 10-gallon aquarium so they have room to stretch out and swim; 20-gallon-long aquariums are recommended.

The general rule of thumb when selecting an aquarium is that you should allow 10 gallons per frog and don’t plan on having the water more than 12 inches deep.

We eventually moved “Froggit” to a 50-gallon tank along with 4 other African Clawed frogs and a bigger goldfish. They enjoyed the extra swimming room, and maintenance got easier as we got closer to the recommended 10 gallons of water per frog. As time went on and we were down to 3 frogs and a fish, that 50-gallon tank seemed to hit a perfect balance. For several months the only “maintenance” I had to do was test the water conditions and top off what had evaporated. The following summer our apartment got too hot, and everything got out of whack, but it was nice while it lasted. 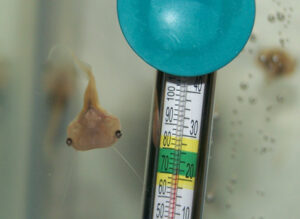 African Clawed Frogs should be kept at 68 – 75 degrees Fahrenheit in clean, treated water. If your tank is likely to get over 80 degrees at any time, you should use Koizyme or Lymozme to prevent bacteria from taking over and making your frogs sick.

ACFs (African Clawed Frogs) should be fed daily, as much as they will eat in 15 minutes. Some frogs can even be trained to take food directly from their human’s fingers. If you try to teach your frog(s) to do this – please be patient. And if they refuse to learn, don’t take it personally. I think it takes an extra-brave frog to work up the courage to touch a human.

Do not house frogs with anything that could fit in their mouth unless you want them to eat it. Before I understood this rule, my frogs ate 5 goldfish, 3 younger frogs, and aquarium gravel. I have seen them attempt to eat their fake plants and even each other!

You can learn more about how to care for African Clawed Frogs at https://xenopus.com/frog-husbandry/ .

I suggest an aquarium with under gravel filtration because tadpoles are small enough to get sucked into a regular filter that hangs over the side of an aquarium. But you could get by with as little as a bowl of comfortably temperatured treated water and sinking fish food. The main drawback is that you will have to clean up and change the water more often.

African Clawed Frogs are known to be escape artists. Make sure your aquarium has a properly fitting hood. It also helps, if you have a large enough aquarium, to keep water levels several inches below the top.

These frogs will eat pretty much anything that they can stuff into their greedy little mouths. Remember to be careful what you put in their tank!

Like many aquarium pets, African Clawed Frogs like having a nice place to hang out and hide! We learned the hard way that you need to make sure your frog’s hiding places are smooth. Ours tore up the webbing fn his feet on the cave we purchased. A section of clean PVC pipe can be a good choice.

Remember to quarantine new pets before adding them to your aquarium, even when buying from a reputable pet store or friend.